Beating the clock: Allshelter provides a tailored solution to protect an $8 million dollar helicopter at the award winning gladstone airport

Beating the clock: Allshelter provides a tailored solution to protect an $8 million dollar helicopter at the award winning gladstone airport

The ravage of Cyclone Oswald in January 2013 is not only a testimony to Queensland’s community resilience, but a relentless reminder that our greatest shield against Mother Nature’s onslaught is preparedness and dependable structures and shelter systems to protect ourselves and our prized possessions.

Almost two years after winning the esteemed National Airport Industry (NAI) Award, the Gladstone Airport Corporate was faced with a pressing need and approached Allshelter’s team of experts for an appropriate solution. In just under three weeks, the airport was taking delivery of the first Coal Seam Gas (CSG) medical evacuation helicopter and needed a temporary, yet robust shelter to harbour this valuable asset against the extreme weather events which are a part of Queensland’s landscape. Beating the clock, Allshelter, leader in innovative site specific weather protection systems, delivered a tailored wind-rated, container mounted, relocatable shelter with a back-end wall as well as a sliding curtain to fully enclose the front and provide a wide doorway. Together with a purpose-built gutter assembly, the Allshelter solution will provide total protection even against a brutal Category 4 cyclone. The Gladstone Airport Corporate was ready, on schedule, to welcome its newest guest.

Gladstone, home of the fifth largest multi-commodity port in Australia, has emerged on the economic scene against the backdrop of Queensland’s flourishing liquefied natural gas (LNG) industry. This unparalleled venture is centred on the compression of natural gas into LNG providing cleaner hydrocarbon energy for shipment to overseas markets as from 2014. This unparalleled undertaking involves the expansion of existing natural coal seam gas production in the Surat and Bowen basins; the building of a substantial network of buried transmission pipelines connecting the gas fields to Gladstone; the construction of a 4.3 km tunnel underneath ‘The Narrows’ crossing linking the mainland with Curtis Island where world-class LNG liquefaction and purification facilities, known as trains, are currently assembled. The final module for the Queensland Curtis LNG plant arrived at Curtis Island in October 2013. The project, which currently passed the 65% completion mark, constitutes of four LNG facilities under construction; QCLNG (Queensland Curtis LNG), GLNG (Gladstone LNG), APLNG (Australia Pacific LNG) and ALNG (Arrow LNG) Arrow Energy/Shell. Furthermore, dozens of communities, hundreds of businesses and thousands of people from all corners of the world are put to use. It is expected to peak in mid-2014 with a force of 10,500 people and is forecasted to provide employment for Queenslanders in places like Roma, Gladstone and Brisbane for at least 30 years.

With the backdrop of such flurry, it was necessary to upgrade the Gladstone Airport facility to meet the demands of such rapid regional growth. The main runway was lengthened and widened during stage one in 2009. The terminal, runways and taxiways sustained major restoration during 2010/2011 whilst the aerodrome continuously remained operational. The $73 million upgrade was named the Best Regional Airport Project of the year for airports with 50,000 to 499,000 passengers. This state-of-the-art amenity has the capacity to accommodate the predicted increase in passenger traffic during the decades to come and will play a pivotal role in the region’s future.

Moreover, workforce safety being of paramount concern, the four LNG champions initiated a rescue and medical evacuation helicopter. The service, run by CareFlight Group Queensland, will provide a dedicated response to on-site incidents on Curtis Island as well as on mainland LNG endeavours. This joint $30 million funding by Australia Pacific LNG, QGC, Santos GLNG and Arrow Energy will further ensure the industry provides additional medivac services for central Queensland. In fact, the helicopter was diverted to Bundaberg to assist with evacuations during January’s 2013 devastating flooding before its imposing arrival at Gladstone Airport and occupancy of the new shelter manufactured by Allshelter.

Phillip Cash, CEO of Gladstone Airport Corporation, approached Allshelter to deliver, within 3 weeks, an optimal structure for the safeguard of the $8 million dollar medivac CSG helicopter. He explained that the helicopter would go onto a steel trolley and pulled into the tailor-made shelter, however, the covering needed to further have:

The necessary width to provide ample clearance for the span length of the helicopter’s main rotor blades.

The critical height to accommodate the tail rotor blades.

A complete back-end wall together with a sliding curtain for the front doorway to isolate their prized asset from gusty winds or severe storms.

A guttering system which will not only capture valuable rainwater but prevent erosion and damage to equipment from unmanaged run-off.

A structure specifically designed with cyclone safety in mind as they hit the Queensland region on an average of 4.7 times per year.

Moreover, Mr Cash further notified Allshelter that the current proposed site was only temporary. The new location, which will house 2 helicopters permanently, was opening up in 6 months and the structure will need to be relocated.

A tensioned high-strength woven polyethylene fabric over an arched steel framework, mounted atop shipping containers, providing the height and width required with ample clearance for the helicopters rotor blades.

The use of Allshelter’ Twistlock technology together with Bolt-On-Top-Rails facilitating deployment time.

A metal gutter system, purpose-built by Allshelter, specifically designed to match the roof area, rainfall intensity and lengths that the water had to run.

A wind-rated shelter which can tackle wind speeds of 230km/h, thus providing complete protection against Category 4 cyclones without having to remove the cover. Furthermore, Allshelter is the only Australian shelter manufacturer with ISO 9001 accreditation (international quality standard) and offers a 10 year warranty for frame and cover.

Within 3 weeks, Allshelter delivered the final undertaking reaching the required dimension of 16m in width, 24m length and 6.4m in height including the containers, to the total satisfaction of the Gladstone Airport Corporation, marking another milestone in Allshelter’s continual excellence mantra.

Furthermore, when Allshelter paid a complimentary visit to inspect the completed Container Shelter facility, the CSG industry’s helicopter had already completed multiple rescue missions to Curtis Island including the evacuation of a collapsed construction worker with heart pains.

Who we are not a good fit for?

A dome shelter or a steel shed? Which one is right for you?

For the latest news
and innovations

The Perfect Shelter Solution to help with Mine Reopening

When you need to store things under cover but have site restrictions or require a temporary solution, a container shelter…
View Case Study 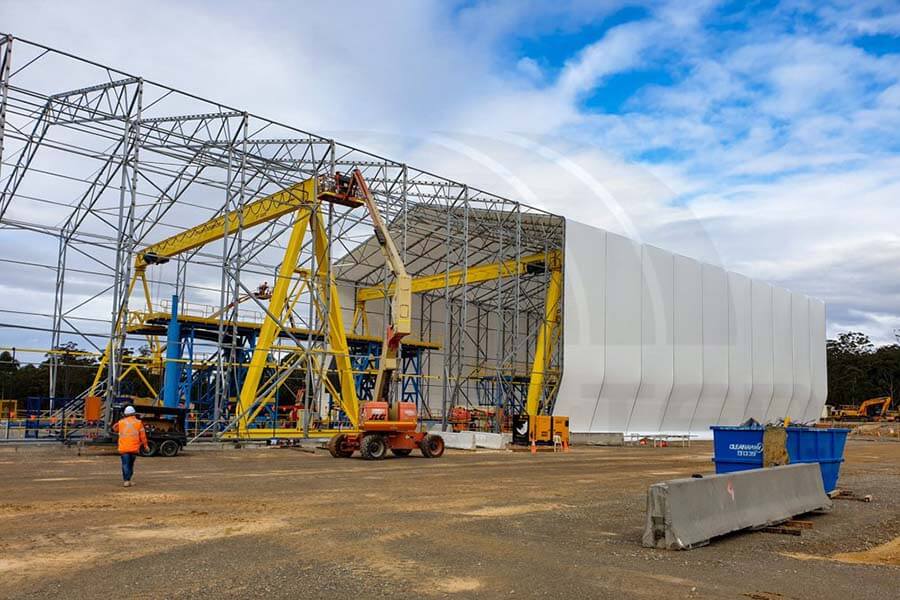 A Fabric Building for a Pre-Cast Facility

In early 2019, Allshelter was engaged to come up with a solution for creating an on-site pre-cast facility, to assist…
View Case Study 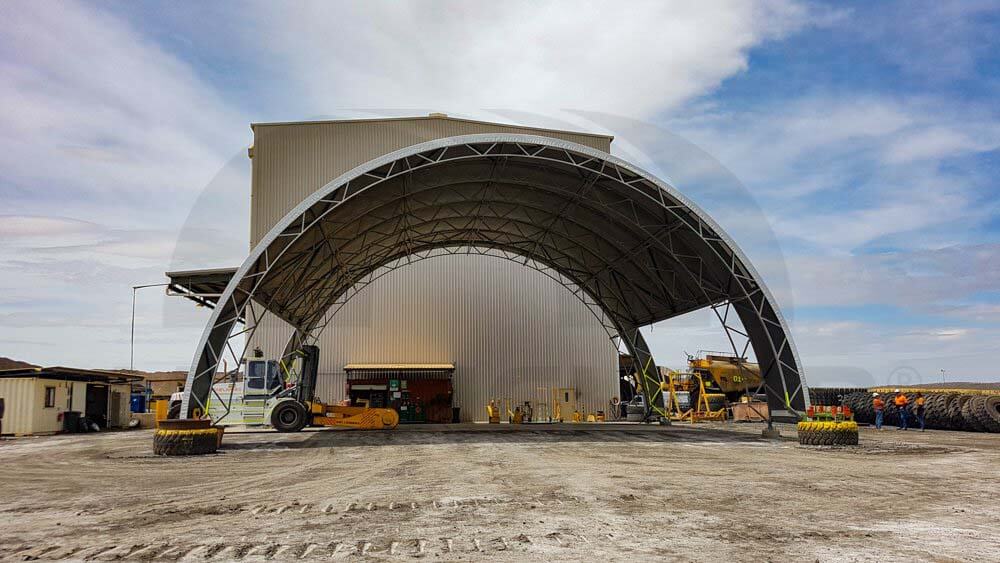 A Cyclone-rated Shelter for McArthur River Mine

McArthur River mine is a world-class zinc-lead mine - one of the world's largest zinc resource. Situated in the Gulf…
View Case Study 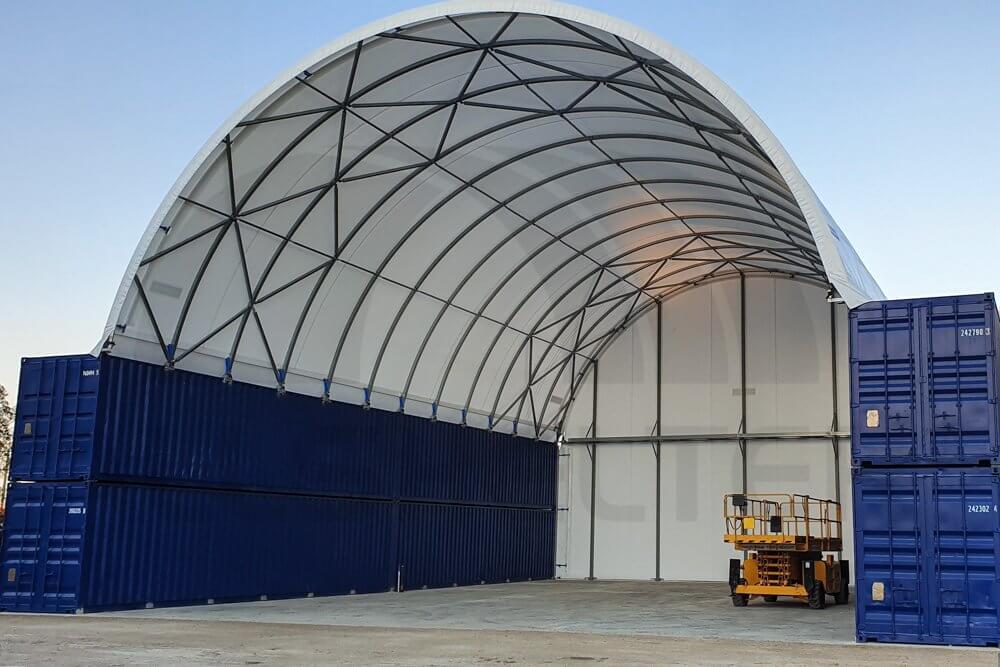 A Paint & Blasting Bay for Bradken

Bradken Resources has been in the foundry business for near a century, and specialises in design and manufacture of cast…
View Case Study 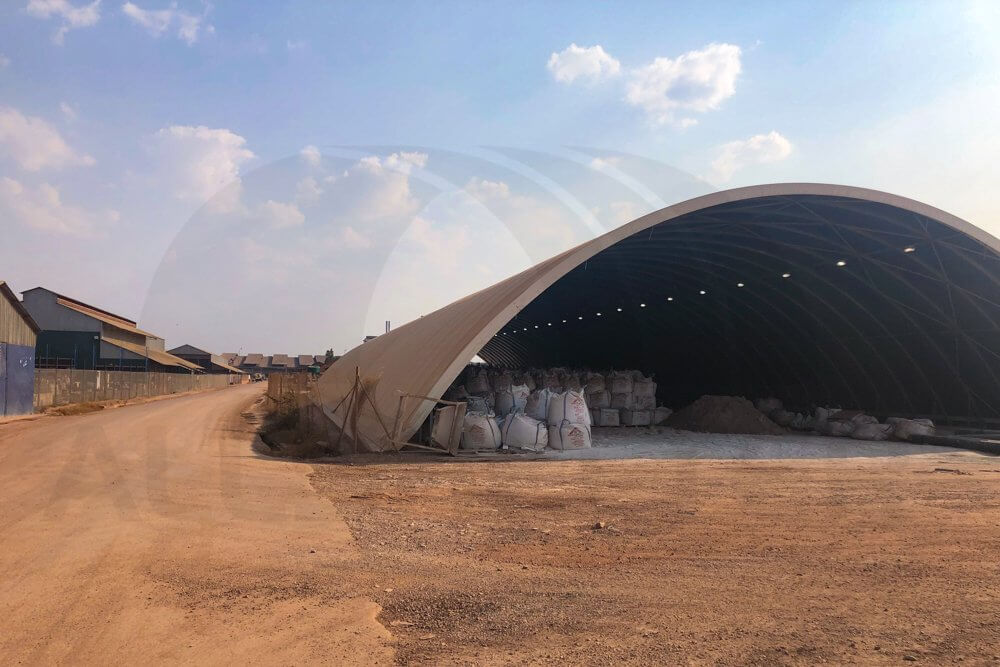 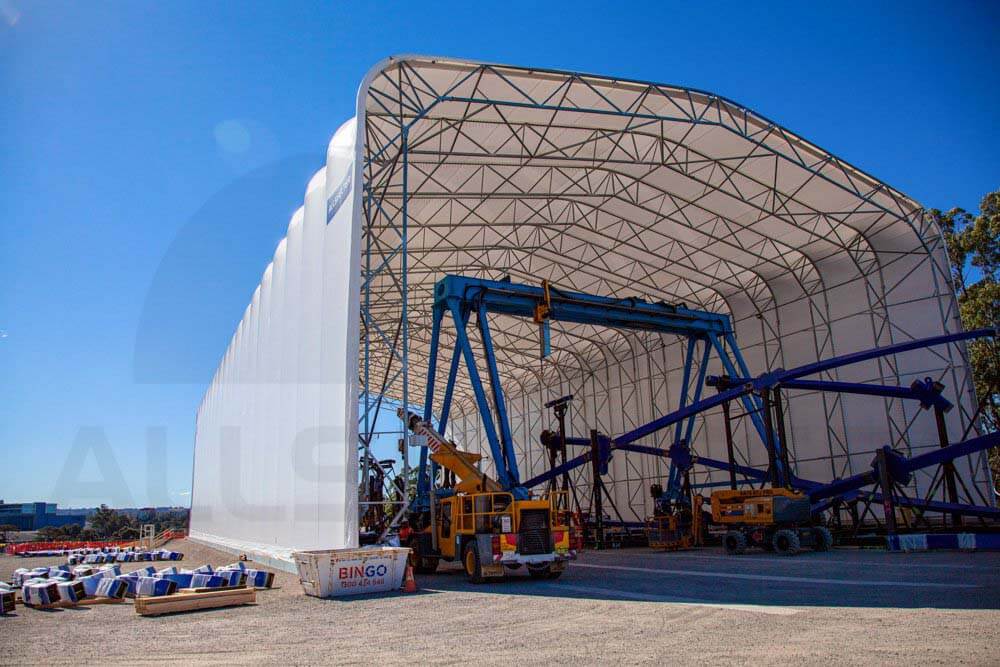 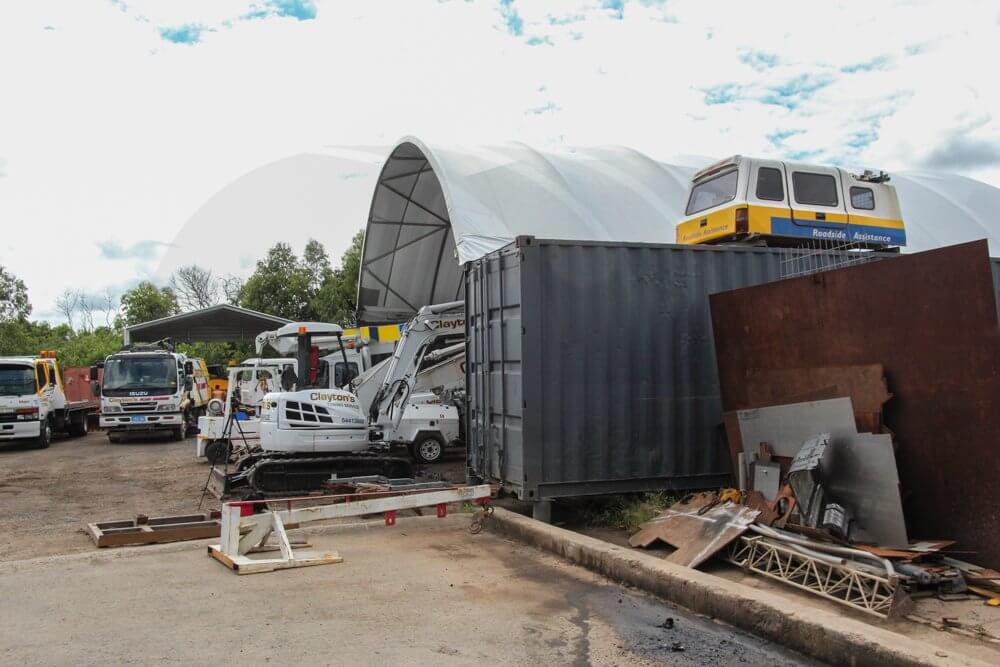 Keeping it out of the weather with a shipping container cover 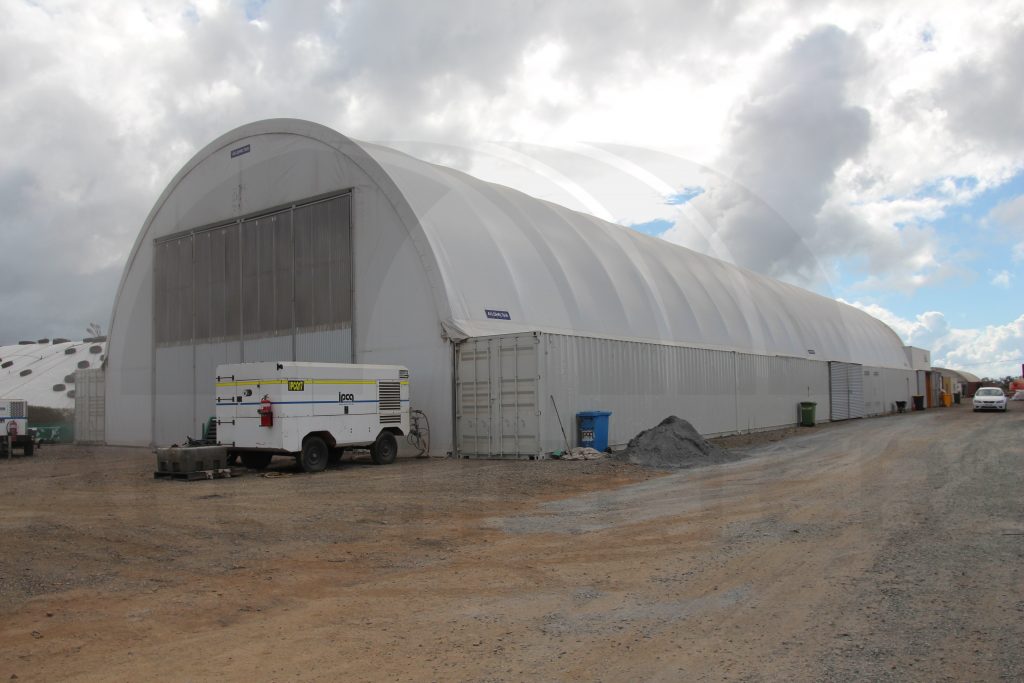 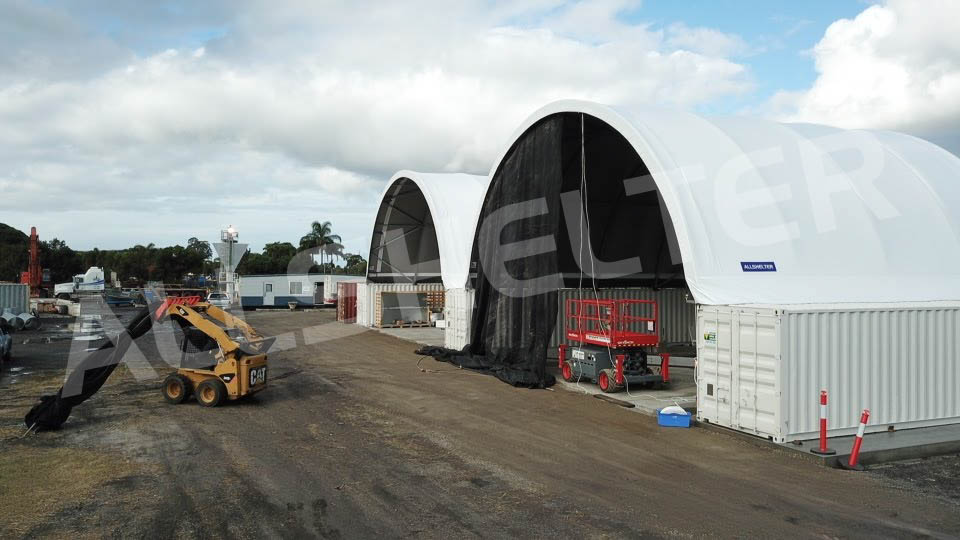 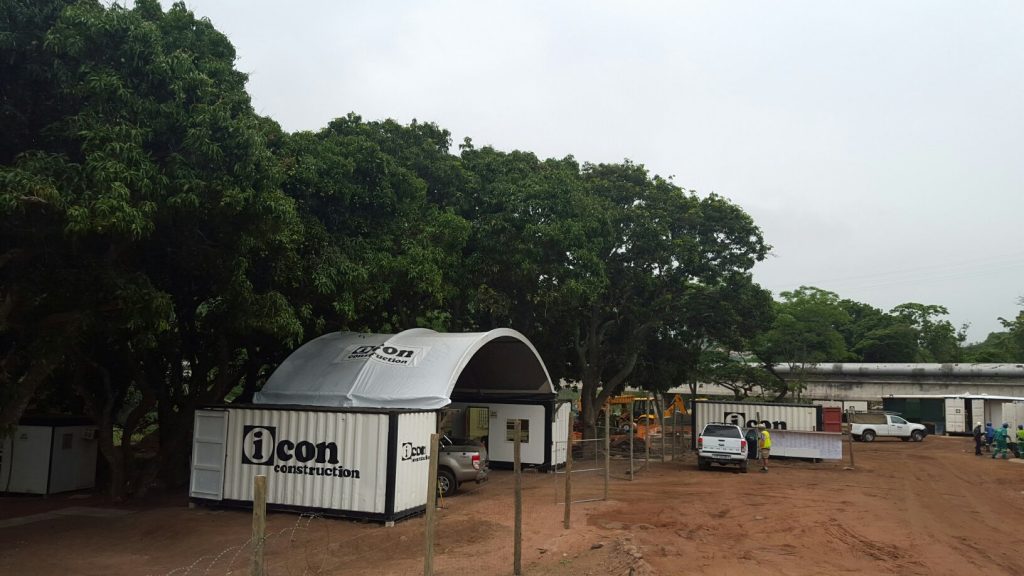